This WordPress.com site is the cat’s pajamas

A personal message that I received recently together with my reply. :). I'm not sure what this guy was getting at but I hope I managed to answer his question. :left:. …

END_OF_DOCUMENT_TOKEN_TO_BE_REPLACED

Yes I’m a muslim so deal with it!

END_OF_DOCUMENT_TOKEN_TO_BE_REPLACED

Maybe I’m just paranoid but I don’t think my Fiancé is being sincere.

We’re starting our fifth month together and we’re still no closer to getting together than we were in January. This is weird given how eager she seemed to be in February just before I went on leave.

I’m sure she’s playing me but I don’t know how to prove it. Well, I do have one idea, but putting hidden cameras in her bedroom is a tad creepy. (Not to mention how illegal it is.)

I don’t have a plan at this point. Should I just wait and see?

My instinct tells me I should cut and run before something goes seriously wrong. I already caught her fooling around with her cousin once. I broke up with her that time, but we, or rather I, talked it out and we agreed to try again without the lies.

As far as I can tell though, she just got better at concealing things instead. She’s clearly still lying to me, it’s just harder to spot the lies now.

Now I’m a progressive, Twenty First Century kinda guy. I’m certain we could find a compromise we could both live with if she was just straight with me. But she seems intent on keeping up the façade anyway.

At this point, my plan is to just be careful and see how things go. It’s not like there’s a lot I can do during the Lockdown anyway.

If my suspension is correct,I’m certain she will give herself away before the Lockdown ends.

Forever is a long time

So, it’s been several years since I last blogged.

A lot of nothing much has happened since then. I may be in a relationship, I think. Although sometimes it feels more like a dictatorship.

Of course, more than half the planet is stuck at home these days. I’m on leave and trying to clean up my rubbish tip of a house. I’m a bit of a hoarder and, to be honest, I’m surprised Miranda didn’t run screaming when she saw the mess.

Just one more thing, a shout out to Cyril for displaying exemplary leadership skills.

It’s been ages since I wrote anything. But don’t get excited, this isn’t really a proper blog post! I’ve finally reset my password. Hopefully, this means I’ll be able to log in from now on.

Robot wars will never be the same again!!

Adam’s new spiderbot is scary enough to scare the life out of Arachnophobics.
I think Mik may have to rethink his robot army stratagem.

Back Before Blogging was Cool

There was a tv advert that often comes to my mind that talks about blogging. Ironically, I can never recall what product was been advertised, making it hard to find any reference to it. However, I have managed to locate a transcript of it.

“Blogging… blogging. On the Internet, Mikey set it up for me. Kids these days know everything. It’s like your own website where you can speak up, play, inspire. I know, I used to find the Internet intimidating too. But this is amazing. It’s… my space where I can just express myself and when you sit back and read what you’ve written its like, Wow! This is me. My creativity.”

The scene is of a woman, presumably a mother, around 30 years of age. She is standing in front of a fridge taking something out. She closes the fridge as she begins to talk, looking straight at the camera as if the viewer is standing there with her in her kitchen.

This was the first time I’d heard the term ‘blogging’ used. I had some vague notion that this activity existed, but since neither I nor anyone I knew had Internet access back then, I had no idea what it was all about.

The description of this ad is from memory as I can’t find a video clip of it anywhere. The transcript took me a while, but I found it here;
http://www.mikestopforth.com/2006/11/12/the-stork-margarine-blogging-advert/

Yes, this was not an ad for some new tech gadget. It wasn’t advertising any new Internet service or product. This was a margarine ad!
I often recall this ad, though I can never recall what the product being advertised was! 😛
I never thought that I would one day publish my own blog. (well, I type and you read. It counts)

After much bashing my face into my keyboard, I finally succeeded at importing My Opera blog to WordPress.com w000t! 😀 (y) :up:

Mifits on location in London 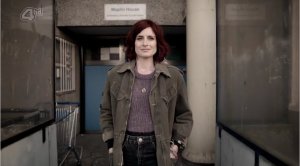 Here we see Abi leaving Maplin House.
And here’s the Google Maps view of the building where this was filmed.

How to install striata-reader to a 64bit Crunchbang Waldorf system!

Banks these days think they rule the World! :irked:
(well, they do, but they could at least pretend to give a damn right?)
So all South African banks require their customers to install some crappy third party software in order to read emailed statements. This software is not part of any web standard, is not installed by default in any Operating System and comes without source code. 🙄 …